When the weather turns colder, my wife and I like to set aside one night per week for a meal prepared in the crock pot.

Slow cooking has a couple of benefits. You can usually prepare the meal ahead of time and just drop it in the crock pot in the morning before heading out the door. As the food cooks, it fills the house with a lush aroma. So when you open the door at the end of your long day, you are rewarded with the mouth-watering smell of a dinner that is already to go. 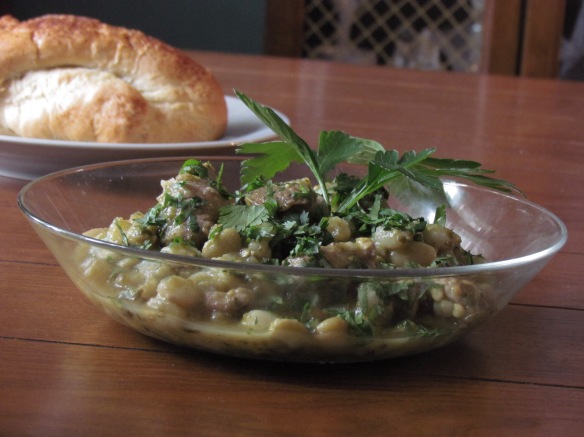 We have our crock pot stand-bys — most notably red beans and rice or turkey chili. But sometimes we like to try something a little different, more challenging.

This recipe for slow-cooked pork and tomatillo stew fits that bill. First of all, it’s green, a color you don’t normally expect to see when you lift the crock pot lid.

Second, it includes ingredients we don’t normally use, including tomatillos, a kind of tiny green tomato that come wrapped in a natural, papery husk. To use, simple remove and discard the husk and rinse off the natural sticky sap that coats the tomatillos.

Another is hominy, which is a giant white corn kernel that has been treated with an alkali. It is the key ingredient in two traditional Mexican dishes — menudo (a hominy and tripe soup) and pozole (a hominy and chicken stew). Canned hominy is widely available in Hispanic markets.

Like most recipes built around beans and corn, this is very inexpensive to make and makes quite a large batch. I’ve been enjoying this stew for the past three days, and it seems to improve with time. Bonus: Pork prices have been dropping lately, so I was able to pick up a boneless pork roast on the cheap.

1. Preheat broiler. Spray a baking sheet, then lay out poblanos, onions, tomatillos and jalapenos and spray with pan spray. Place under the broiler until charred, about 5 minutes, flip peices over and char other side another 5 minutes. Let cool slightly, then puree in food processor or blender.

3. To serve, spoon into soup bowl and sprinkle with chopped cilantro.

This simple and easy recipe can be made ahead of time, and you can freeze whatever you don’t eat right away.

What uncommon crock pot recipes do you like to make? Share your ideas in the comments section below. And thanks for looking at my blog!