I like a book that tells a great story. But when you get a great story and an amazing recipe — such as this one for oven-roasted French fries — it’s a double bonus!

I’ve been a Steven King fan since I was a kid. I can recall being scared out of my wits by “Carrie” and “The Shining”, immersing myself into the dense, rich world of “The Stand” and being being too frightened to go to sleep after finishing “Salem’s Lot” — all before I graduated eighth grade!

As I grew older, there came a period where I turned my nose up at King’s books for pandering too much to the masses. With my Notre Dame English literature degree, I couldn’t be bothered with “popular” writing about horror and the supernatural. 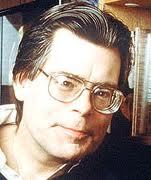 Fortunately, I eventually climbed down from my high horse and returned to King’s books simply because they were entertaining, had terrific plots and characterization and, well, I liked them.

I’ve read nearly all of his novels and most of his short story collections. While they aren’t all winners (“Lisey’s Story” in particular, I recall throwing across the room), King has been consistently readable and fun. I look forward to his books the way I’m sure 19th Century readers loooked forward to the new releases from Charles Dickens and Mark Twain.

What does this have to do with food? Good question.

In his latest book, “11/22/63”, King tells the story of a high school English teacher who travels through a time portal to the late 1950s, where he attempts to thwart the Kennedy assasination. It’s an exciting and entertaining story that kept me riveted from start to finish (with the brief exception of a pie fight sequence inserted into the middle of the book which momentarily took me out of the story).

After the book’s conclusion, King (or his editors) added appendixes that list some of the most popular music of that era, an interview with King, a list of questions for book clubs, and the recipes for many of the dishes referenced in the book.

With most of the book set in Texas in the early 1960s, it’s not surprising that most of recipes are for the type of food found in old fashioned Texas barbeque joints, including milk shakes, black bottom pie, broiled ham steak, sour cream pound cake, and this recipe for oven-roasted French fries.

French fries are one of those foods that are hard to replicate at home because most people don’t have deep fat fryers in their kitchens. But this recipe — which makes spicy, crisp and delicious fries — does a pretty good job, especially if you serve them hot right out of the oven.

1. Preheat oven to 450F. Peel and cut potatoes into 1/2 sticks, then soak in cold water for at least 10 minutes. Drain and dry well with between paper or kitchen towels.

2. Place potatoes in a mixing bowl and toss with the oil. Spread on a sheet pan and bake, turning occasionally, until golden brown and crisp, about 45 minutes. Turn out onto a plate lined with a paper towel to absorb some of the grease, then season generously with the salt, pepper and cayenne.

In true Texas BBQ style, I served mine under some barbeque grilled chicken, so that the excess barbeque sauce dripped down onto the fries, adding even more flavor. The squash served on the side is from our garden!

Reading a great story from a favorite author is pretty enjoyable in itself, but when the book comes with bonuses such as easy-to-make recipes, it’s something special.