Georgian wine doesn’t get much play in the US. Maybe it’s because the nation was formerly part of the “Evil Empire”, the Soviet Union. 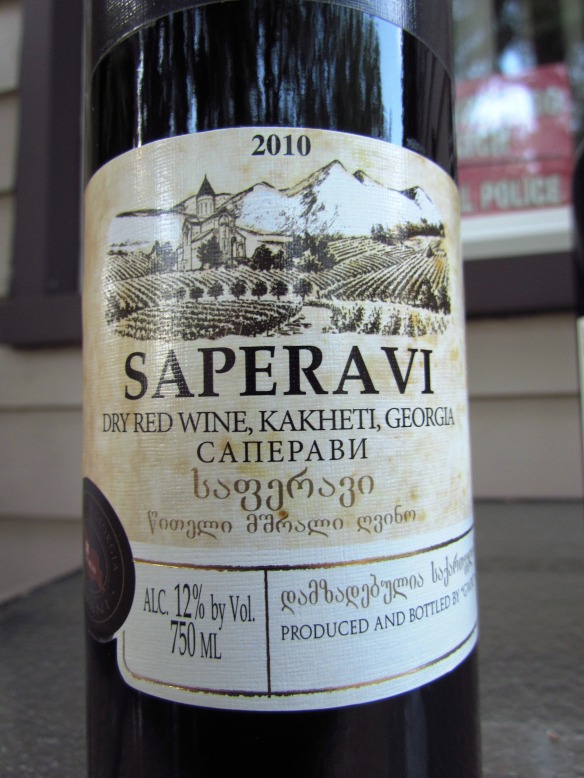 But the wines made in the Republic of Georgia, located on the Black Sea in the Caucasus region of Eurasia, were the first in recorded history, with archeological evidence indicating that people have been making wine there since before 8,000 B.C. 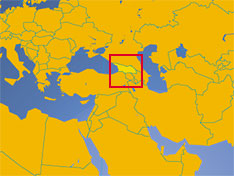 Personally, I had never heard of Georgian wines prior to finding an unusual bottle wrapped in cellophane on the shelf of my local wine store. It’s called Saperavi, and it’s a dry red wine from the Kakheti region, the heart of Georgia’s wine-producing area.

Saperavi — the Georgian word for “paint” — is actually a type of grape native to Kakheti. It is a deep red grape that produces the darkest juice of any grape in the world, practically as black as squid ink. Yet this wine’s flavor is much more mellow than you might expect. While not as smoothly rounded as merlot, it is closer to zinfandel, having the same type of characteristic spiciness.

I found it to be a bit exotic, yet quite drinkable. Whenever I try a wine I’ve never heard of, especially from a place I know absolutely nothing about, I always approach it with a bit of trepidation. But in this case my anxiety was unfounded. Saperavi was delicious.

It was also very inexpensive. I paid $6.45 for the bottle, well below my self-imposed limite of $7.99/bottle for affordable wines. 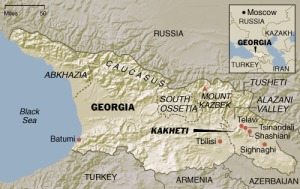 And it comes with such a rich history. Some credit the people of Kakheti with the invention of wine. Nearly 5,000 years before Moses led the Israelites out of Egypt, people in Kakheti discovered that if they buried grape juice in clay jars underground at the beginning of winter, when they dug them up in the spring, it will have fermented into wine.

Then there’s the Kakheti tradition of drinking wine out of goat horns, something that apparently is still being done to this day.

As Americans, we sometimes are prejudiced against all things Russian due to lingering  resentment from the Cold War. But Georgia never wanted to be part of the Soviet Union in the first place and was actually invaded by the Red Army in 1921. It gained its independence in 1991, shortly before the collapse of the Soviet Union.

Russia and Georgia continue to have a tortured relationship, with the Russian army occupying portions of the country as recently as 2008. In fact, Mikhail Gorbachev tried to destroy the Georgian wine industry in 1985 as part of an anti-alcohol campaign. And Georgian wine has been outlawed in Russia since 2006 due to an ongoing wine embargo. 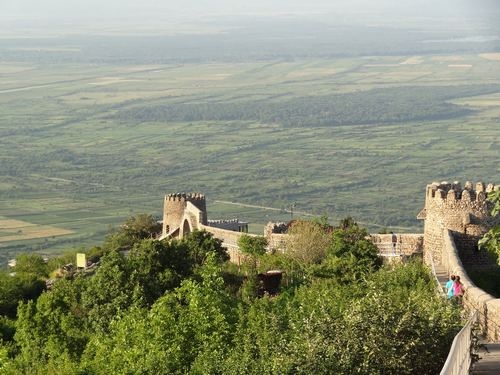 So there’s no reason to resent Georgian wines based on the country’s past association with the Soviets. The country produces a wide variety of wines, both reds and white and even fortified wines. In fact, on the shelf next to the Saperavi were several Georgian sweet red wines.

With its numerous vineyards and picturesque mountain setting, Kakheti apparently has a growing wine tourism industry, so if you are planning a trip in that part of the world, it looks absolutely beautiful. As the official Kakheti regional administration website states, “Feel welcome to Kalkheti!”

I’m not sure if Georgian wines will ever become as popular as Italian or French wines, but if Saperavi is any indication of their quality (and affordability), then they are certainly worth checking out.