Brown rice has always been my culinary Kryptonite. No matter how many times I’ve tried to make it, I could never seem to get it right. One particularly mushy tray of brown rice may have even cost me a catering job one time.

Unlike white rice — which is so simple to make it practically jumps into the rice steamer and cooks itself — brown rice is really difficult for me to get right. It either turns out too crunchy, too mushy, or sometimes both in the same pot.

The problem has to do with the cooking time. While white rice is fully cooked in about 15 to 20 minutes, brown rice typically takes between 45 minutes and an hour to fully absorb all of the liquid. And a lot can go wrong during that amount of time.

Yet I truly want to be able to cook brown rice perfectly time after time because it has a lot more nutritional value than white rice. That’s because it still has the bran and the germ, which are removed with white rice. These make brown rice both higher in protein and give it a chewier, nuttier flavor than more “processed” rices.

Over the years, I’ve tried every preparation method for brown rice that I could get my hands on. I’ve soaked it, rinsed it, and even fried it in oil before cooking it. But it always turned out like a failed science project. I’ve probably thrown away more ruined batches of brown rice during my cooking career than any other type of food.

But the other day, I finally learned the secret to defeating brown rice.

I was listening to Terry Gross on National Public Radio while walking our three dogs. She had two cookbook authors on her program from America’s Test Kitchen. They have a new book about gluten-free cooking out and when the subject of brown rice came up, I was all ears.

They said that the trick to cooking brown rice wasn’t just the time, but the temperature. Given its structure, brown rice needs to hold a constant high temperature in order to absorb all the liquid evenly.

So when you simmer it, the rice on the bottom of the pot is cooked faster than the rice at the top of the pot. And when you let it sit covered for a few minutes after cooking it, the rice in the center keeps absorbing liquid, often resulting in the starchy, unappetizing mess with which I am so familiar. 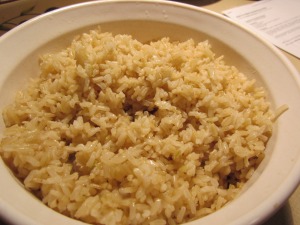 I’ve been battling my arch-nemesis, brown rice for years,so I practically ran home to try it out. And it worked! About an hour later, I had three very tired dogs and one delicious pot of fluffy, perfect brown rice.

Thank you people from America’s Test Kitchen. You’ve allowed me to reach a peace accord with what was once my worst enemy, brown rice.

2. Combine the water and oil in a pot and bring to a boil. Stir in salt then pour liquid over the rice. Cover the baking dish tightly with two sheets of aluminum foil and place on the center rack of the oven.

3. Cook for 1 hour, then remove from oven and uncover. Fluff the rice with a fork then cover the dish with a clean dish towel and let the some of the excess steam escape for 5 minutes while some of the steam is still absorbed by the rice. Serve immediately and cheer your victory in your life-long battle against brown rice.

6 thoughts on “My Arch-Nemesis … Brown Rice”