Back in the late 1970s, the parish I grew up in commissioned a family photo book. Every St. Catherine of Alexandria family was invited to show up at the school at an appointed time to have their portrait taken by a professional photographer.

When my family arrived, we were hustled into a makeshift photo studio set up in an empty classroom and posed by the photographer in front of a screen. Apparently, we were too dour, so he tried to lighten things up by making us laugh.

“How many Polish people does it take to ….”

My father stopped him right there. “A word of warning,” he said, channelling his best  Dirty Harry. “You probably don’t want to be telling Polish jokes in this parish, pal. It’s mostly Polish people.”

The photographer promptly shut up and snapped the picture.

It’s easy to take for granted how engrained Polish culture is in our community. Although we weren’t Polish — the McCulloughs are most definitely Irish — there are neighborhoods and even entire towns around my house where some of the signs on businesses and storefronts are in both English and Polish — and the rest are in just Polish.

Enter any number of stores around here and it’s like walking into a business in downtown Krakow or Warsaw. All the products are imported from Poland, Polish is the spoken language, and all the signs and prices are in Polish.

When I was a younger man, I married a Polish girl. My daughter is half-Polish. One of my favorite memories from that marriage was when my ex-wife’s relatives would come over to our apartment laden with bags and boxes of wonderful, steaming Polish foods they had just bought from stores on Milwaukee Avenue, the heart of Chicago’s Polish community.

Like corned beef for the Irish or pasta for the Italians, if  it’s not the national dish, pierogi is at least the food that best represents the cultural identity of Chicago Poles. Pierogi from various Polish delicatesans are compared, contrasted and debated as if they were United Nations resolutions rather than stuffed dumplings.

Everybody has their favorite place for pierogi, and they are willing to argue vehemently for hours as to why their choice is the best.

And that’s just the beginning of the debate. There’s the various stuffings to consider: Potato, sauerkraut, cheese, fruit and an infinite variety of others. And the personalized topping preferences: Sour cream, applesauce, browned butter.

Frozen Pierogi are sold in every grocery store in Chicago, but it would be scandalous to serve them. Not when there are so many excellent places to buy handmade pierogi. That would sort of be like serving frozen pizza to somebody from Chicago. It’s simply not done.

An even better option is to make your own pierogi. They are supremely simple to make and the end result is fresher and often even better than anything you can buy.

Pierogi can be stuffed with anything, making them perfect for burning out leftovers. They freeze really well, so you can make a big batch and throw them in the freezer, taking out only a few at a time as you need them.

Here’s my simple, quick pierogi recipe. Although by no means authentic — my first marriage didn’t last long enough for me to be admitted to that secret society — it is a reasonable facsimile.

At least for an Irishman.

1. To make the dough, in a medium mixing bowl, mix together the flour and salt. Add the egg to the flour and stir together with a fork. The dough will be quite clumpy at this stage. Work in the sour cream and soft butter until the dough comes together in a slightly rough, slightly sticky ball. Using just your fingertips, knead and fold the dough without adding additional flour until the dough becomes less sticky but still quite moist. Wrap the dough well in plastic wrap and refrigerate for 30 to 60 minutes, or up to 48 hours.

2. You can fill your pierogi with whatever you like. I used leftover mashed sweet potato that had been mixed with a little butter, salt and pepper. Fill the pierogi by rolling half the dough 1/8″ thick. Use a 2″ round cutter — I actually used an inverted drinking glass — to cut circles of dough. Repeat with the other half of the dough. Save the scraps: These can be snipped into small pieces and added to simmering soups.

3. Place 2 tsp of filling on each round of dough. Gently fold the dough over, forming a pocket around the filling. Pinch the edges of the pierogi to seal, then seal again with the tines of a fork.

4. Fill a large stockpot with salted water and bring to a boil. Drop about 10 pierogi at a time into the pot so they have room to float without sticking. When the pierogi float after about 10 minutes, they’re done. Remove them to side plate. Once they are cooled, you can tranfer them to freezer bags and place them in the freezer for another time, or cook them right away.

5. To finish the pierogis, place a saute pan over a medium heat and drop about a TBS of whole butter into it. When it reaches the foaming stage, sauté a few dieced shallots or onions in the butter then add the drained pierogi . Cook until browned and crisped. Serve hot with sour cream, applesauce, browned butter or any other condiment you like.

Here’s something you may not know: Chicago has an enormous Polish population.

There are more Poles living in Chicago than in Warsaw. The influence of this population is evident everywhere, especially where I live. Many store signs are in both English and Polish, and there are certain markets where no English is posted or spoken. When you walk in, it’s like being teleported to a store in Poland. 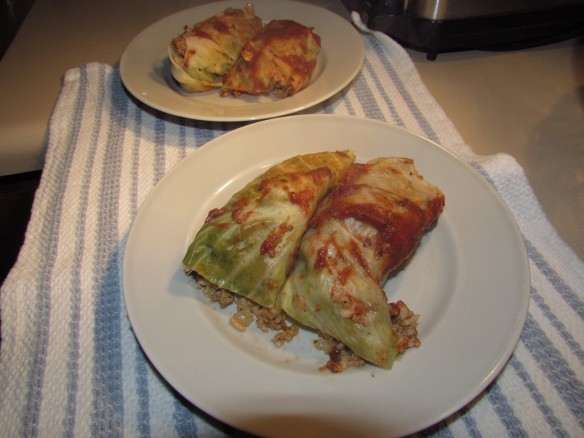 One of my fondest memories growing up was in 1979 when Pope John Paul II, the first Polish pope, visited Chicago and climbed onto the roof of a high school only a few blocks from my house to greet a massive crowd of mostly Polish followers.

Poland has one of the richest cultures and proudest histories in the world. And Polish cuisine is among my favorites, even though my ethnic background is Irish.

Full disclosure: My first wife’s family was Polish and my daughter is half Polish. Back in those days, I used to look forward to family parties because it meant lots of delicious Polish food — kielbasa, pierogis, kolatchkies and today’s recipe, gołąbki (ga-WOOM-key) or stuffed cabbage rolls.

These are delicious and so easy to make. They bear a strong similarity to stuffed green peppers, but the tanginess of the cabbage adds a whole other level of flavor.

1. Bring a pot of water to boil. Add cabbage leaves and boil until softened, about 4 minutes. Drain in colander then return to pot and cover with cold water to stop the cooking process.

2. Place cast iron pan on the fire. When hot, add EVOO. When smoking, add onions, green peppers and shredded cabbage and cook until onions just start to brown, about 3 minutes. Add ground beef or turkey and cook until meat is browned, about five minutes, stirring occasionally. In the last minute of cooking, stir in the crushed garlic and Italian seasoning.

3. To make the sauce, combine the tomato sauce, Italian seasoning and sugar in a small pot and cook together for about five minutes, stirring occasionally.

4. Preheat oven to 350F. In mixing bowl, stir together the meat mixture, rice and about half the sauce. Season to taste with salt and pepper. Lay a cabbage leaf on a cutting board and spoon about 2 TBS of the mixture into the center. Roll up into a log shape and fold the flaps underneat to seal. Place in a baking dish. Repeat with the remaining cabbage leaves.

5. Cover cabbage rolls with the remaining sauce, then cover with foil and bake 35 minutes. Let cool for a couple of minutes before serving.

These are a great meal all by themselves because the protein, starch and vegetable are all contained in the individual cabbage roll. But they also go great with some seared kielbasa sausage and a couple of pierogi.

What ethnic cuisines are popular where you live? Share your story in the comments section below. And thanks for looking at my blog!