It’s been said that if you have Chinese food in China, it bears no resemblance to the version sold here in the US.

The flavors are bolder, the ingredients are more diverse, and the dishes that are spicy would probably be banned in this country as a public health hazard. 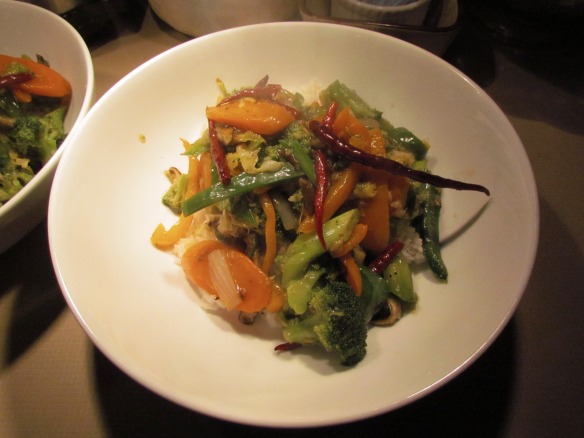 Szechuan cooking in particular is known for its spiciness, as well as its liberal use of garlic and chili peppers. It originates in the Szechuan province, which is in the southwestern part of China, and frequently features the Szechuan pepper, also known as the “flower pepper”.

This pepper has a citrusy flavor, is intensely fragrant and very, very hot. So hot, in fact, that is causes a “tingly-numbing” sensation in the mouth.

I enjoy spicy foods and wanted to replicate the Chinese restaurant standard Szechuan Vegetables in my own kitchen. Sadly, I’ve never had the authentic dish, only the watered down version sold to Americans. Yet I enjoy the spicy combination of stir-fried vegetables, pungent garlic and ginger sauce, and of course the tiny peppers bring heat to the dish.

I usually don’t eat the peppers themselves — unless I accidentally slip one into my mouth — but just their presence in the dish brings the spicyness quotient up several degrees.

I found an enormous bag of dried chile de arbol at the local Mexican produce market for only $2.38, so I bought it so that I would have essentially a lifetime suppy of the lovely spicy peppers. Unfortunately, the tiny, red peppers I purchased had their ribs and seeds removed, rendering them substantially less hot.

Still, the combination of all the different vegetables in this dish combined with the sauce I whipped together made this Westernized version of Szechuan vegetables an easy and delicious mid-week treat, despite its lack of heat.

1 handful Chiles de Arbol (or Szechuan peppers, if you can find them)

4. Season to taste with salt and pepper and serve over freshly steamed white rice.

Traditional Szechuan cuisine is composed of seven basic flavors: sour, pungent, hot, sweet, aromatic and salty. Hopefully, someday I will be able to travel to China and try all of them.