Under the blazing Sudanese sun, groups of women crouch before a pile of semolina wheat, carefully sprinkling it with water before rolling it out into pellets and passing them through a sieve to make couscous.  For several long days they toil, building a store of food that will be dried then stored, feeding their village for months.

Meanwhile, in America, you open a box, pour it into boiling water and cover and it’s ready five minutes later. What a country!

Couscous – which is part grain, part pasta – has been food staple for more than a
thousand years. It  is most commonly associated with the Middle East, but in fact is also widely used throughout Africa, Europe and Asia. 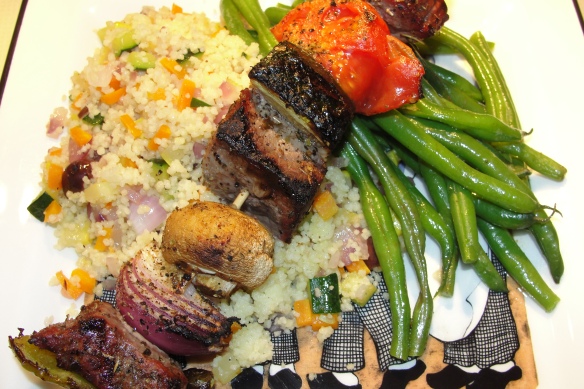 The coucous most commonly available in the United States is pre-steamed then dehydrated, just like instant rice. It can be served hot as the starch portion of a dish, or cold as a salad.

Israeli couscous, which has much larger pearls, is actually more of a pasta like the
Italian orzo.

Around where I live, you typically see a brand called Near East couscous, which comes plain or a variety of flavors. Each box comes with an envelope of powdered flavoring
agents, which I always throw away.

I’ve also bought it in larger packages, usually in Arabic groceries. A word of advice: transfer it immediately to  an airtight plastic container with a lid. The tiny pellets tend to get everywhere.

Couscous has a much different taste and texture than pasta or rice. It is obviously smaller, but to me the flavor is more velvety and nuttier. If I’m serving it hot, I toss it in a little butter then season it with salt and pepper. It is great for a vegetarian entrée, or it pairs well with just about any meat or seafood. I think it has a little more versatility than rice or pasta.

Try substituting couscous where you would use rice or pasta. It can transform an ordinary midweek meal into something more exotic. It’s also relatively inexpensive. I paid $2.64 for a 10 oz box of couscous — which makes enough for at least four people as an accompaniment. But you can find it for less in an Arabic grocery.

I almost always use it as a base for Shish-Ka-Bob because of the cultural thematic unity. In Libya, it is commonly served with braised camel: I’d like to try that!

Here’s a recipe for an easy  couscous salad I like to make. It will stay fresh refrigerated for several days and is great for an on-the-go lunch. Like most grain salads, it tastes even better the second day after the flavors have had time to meld together. 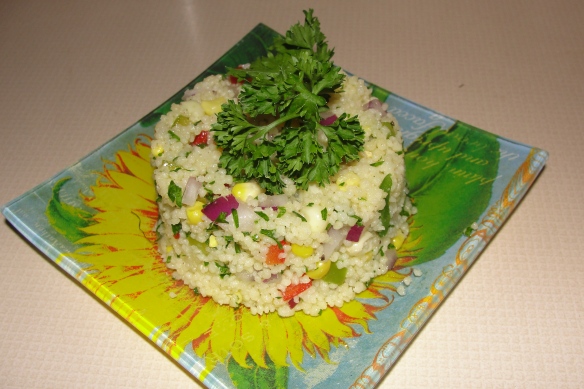 Bring water or chicken stock to a boil, then stir in couscous and cover. Wait five minutes then fluff with fork. Fold in EVOO, onion, carrot, red pepper, tomato, jalapeno and parsley. Season with S&P to taste. Garnish with sliced basil.

What more exotic grains do you use to spice up a meal? Share your ideas in the comments section.