The weather is officially cooler here in Chicago, so it’s time for one of the most exciting times of the year in our house: The beginning of crock pot season! I decided to start this season with something basic — Crock Pot Spaghetti Sauce. 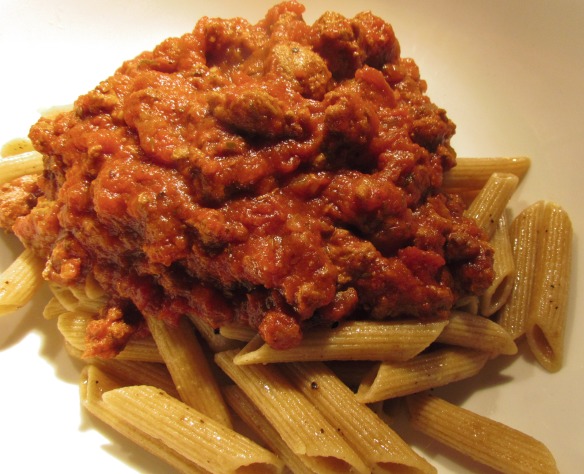 Last crock pot season ended on a sad note. My crock pot broke! It was only about a year old, but I suppose I must have worn it out. During the colder months, we use our crock pot A LOT.

One day, it just died in the middle of making a batch of chili. Rescucitation efforts were unsuccessful. I was able to save the chili, however.

The good news is that I bought a brand new crock pot to kick off this season. While the last one had all the bells and whistles — including a digital readout, the ability to shift temperatures automatically, a temperature probe I never used — this time I decided to go back to basics.

I bought it at our local Kohl’s. I love that store because of all the discounts and special offers you get there. In this case, I was able to get my brand new, back-to-basics crock pot for a whopping … $13!!! That made my day, especially when you consider the last one that broke after only about a year cost more than $60.

It seems like I find new recipes I want to make from only a handful of blogs. That was the case with this Crock Pot Spaghetti Sauce recipe which I found on the wonderful Mom Makes … blog. Probably about 90 percent of the internet recipes I try come from either there or How Sweet It Is.

I haven’t gotten on to Pinterest yet because I tend to be a bit obsessive. I’m afraid if I start looking around on that site, it would be days before I got off of it. That’s the same reason I don’t allow myself to play video games, incidentally. There are entire months of my life in the late ’80s that were wasted playing Super Mario Brothers.

Anyway, I modified this recipe slightly. I used ground turkey instead of ground beef. And I didn’t add the can of tomato sauce until close to the end of the cooking time because I discovered I didn’t have any and had to go out and buy some.

Still, it turned out very delicious. Both Sandi and I agreed that it was far superior to store bought pasta sauces, which tend not to taste much like anything. The tomato paste gave this sauce a distinctive bite to it, which I enjoyed.

Also, I substituted 1-1/2 TBS of Italian seasoning for the dried basil, thyme oregano because it is basically the same thing anyway.

28 oz can of Crushed Tomatoes

8 oz can of Tomato Paste

6 oz can of Tomato Sauce

2 TBS Butter (I actually forgot to add this)

1. Put a cast iron pan over a medium heat. When hot, add 1 TBS olive oil. When smoking, add the onions and cook until translucent, about 2 minutes, then add ground turkey. Season with salt and pepper and cook until liquid evaporates and meat begins to brown, about 10 minutes, stirring occasionally.

2. Meanwhile, in the crock pot, add the crushed tomatoes, tomato paste, tomato sauce, garlic and all the herbs and spices. When meat is ready, add to the crock pot and stir together. Cook on low for 4 to 6 hours, stirring once or twice. Add the butter just before serving.

Crock pot season is off to a great start with this delicious recipe. What sort of meals do you like to make in your crock pot? Share your ideas in the comments section below. And thanks for looking at my blog!